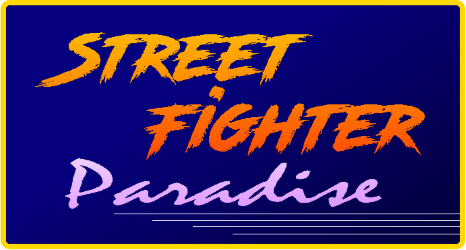 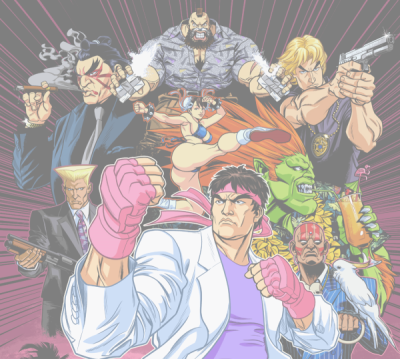 Street Fighter Paradise is a site dedicated to keeping the best roleplaying game ever published by White Wolf alive for future generations! In 1994 White Wolf, best known as the publisher of "Vampire: The Masquerade" and other "World of Darkness" games released "Street Fighter: The Storytelling Game". It was a much more upbeat, pulpy and exciting kind of game than their usual grim fare. Additionally, the game even managed to have an entertaining fight system! It really is pretty amazing how such an unlikely game came together so well.

Here you can expect to find materials for runnning Street Fighter, links to other resources, updates on my personal Street Fighter RPG projects, and eventually some history of the game. Enjoy!

The trying year of 2020 is now coming to a close. As much of a challenge the year has been for many of us, 2020 has maybe been the best year the Street Fighter RPG fandom has seen in at least 4 years! We've seen Mr. Batjutsu complete translation of every Warrior's Fist 'zine in existence, including the fresh new Holiday 2020 Warrior's Fist Special #8, as well as the Street Fighter Circuit Guide a Mortal Kombat supplement, and an index of all the articles from Warrior's Fist! In June of this year, Matt Meade pushed out a fresh revision of his G-File sourcebook that included stats for Necalli and some additional maneuvers. Matt also worked with Ingo Muller to aid in editing and translation of Ingo's excellent adventure Shadows Over the Sun. Also, not to forget Eric "Musashi" Souza, Odmir Fortez and Gabriel Tabatcheik, who were the source of so much of the material that got translated this year! 2020 was definitely the year of the total Brazilian & American scene crossover. The beginning of the year also saw a lot of conversation and rules questions and musings on the Facebook group that were highly entertaining, and we even saw some old proposals straight from Andrew J. Lucas that he pitched to White Wolf back in the day. Finally, I've enjoyed playing with my Street Fighter site here, and today I've added a brand new resource: The Street Fighter Character Compendium! This compendium contains the character sheets for every character made in the core rules and every supplement published for Street Fighter during its original run. It's kinda done up in the style of a Character Select screen. Hope you enjoy it, and have blast in 2021!

Hey Street Fighters! In the world of the RPG fandom, Mr. Batjutsu has finally done it! He's translated every Warrior's Fist 'zine, including the latest issue #23. Also, the Street Fighter Circuit Guide has been updated to include an appendix describing an alternate way of playing the game in more of a "run through the fight career" style you may wanna check out. Might as well, it's all free! Personally, I've been having a blast playing in a campaign with some friends from back in the day. "Hissatsuwaza: Fighting with Style!" is a campaign that sees us as the cast of a reality TV show where we travel the world, eat food at vacation spots, and meet with local martial artists, where undoubtedly something ridiculous, fun, and martial artsy will go down. We've been playing now for, I believe, 11 sessions! Feels great to be playing a game while also being involved in the fandom. Makes me feel like it's not just me running on some old nostalgia, but it's a real living thing I'm going on about here. Maybe I should do up an article regarding some of the special maneuvers the GM has cooked up for this game, just in case they strike anyone's fancy. I can tell you, this game holds up! If you can, I hope you're able hop on and give this game another ride, because it's all good times.

What's new in the world of Street Fighter roleplaying? Well, we can thank Richard "Bat" Brewster for it! The efforts to translate the Brazilian fan magazine, "Punho do Guerreiro" (Warrior's Fist) has continued at a good pace. As I write this, 25 issues have been translated (19 regular issues, and 6 special issues), leaving only 3 issues before Richard will have caught up to having everything translated up to the current Brazilian output. That's been pretty amazing and great. Another supplement out of the Brazilian scene has also been translated, and it's a good one: The Street Fighter Circuit Guide. This guide is what many felt the original "Contenders" supplement should have been. It is a compilation of fighters for every style and at multiple ranks, so poor Street Fighter GMs don't need to stat out a million fighters to fill out 16 man tournament brackets every session. It's very usable and straight to the point. If you're running a Street Fighter game, I highly recommend you check it out. You can find links to all of this material in the "Get Street Fighter: The Storytelling Game!" section of the site right here.

The Street Fighter RPG scene has produced! The recent uptick in activity on the Street Fighter RPG Facebook group has been followed up with the release of new material. Among those, today Matt Meade has released his latest version of the G-File! Prior to that, Shadows Over the Sun, a new, sizable and quality adventure out of the Brazilian scene had been translated and is now available. The production values are good, and the adventure is decent as well. Also, Batjutsu has been continuing translation efforts on Warrior's Fist, having turned out 7 regular and 2 special issues of this Brazilian fan magazine! Surpising almost everyone, 2020 is turning out to be a decent year to be a fan of Street Fighter: The Storytelling Game (even if 2020 may otherwise have... shortcomings).

As for my own efforts, they have been lax. I have begun the task of laying the Street Fighter 20th Anniversary Edition out using Affinity Publisher, and have made my way through the front material and through the 1st couple of chapters. This is not bad, and it is simply a matter of putting in the time to get the rest poured into the new program. There is no "I don't know what to do" about the process holding me up. Then after that, it'd be the corrections and soliciting feedback. With the fandom being as active as it is now, it's going to be a good time for me to get some feedback too, I expect. Anyways, enjoy the latest fruits of the fandom!

Almost 5 years ago I released the 20th Anniversary edition of the Street Fighter RPG. Now it's time for an update! You may notice the site here has seen a bit of a refresh as well. Originally, SF20 was created in LibreOffice, doing whatever I could at the time to make it look like the original books in style. Over the course of the last 5 years some notes have stacked up, as far as errata and improvements needed to SF20, and I've finally begun the process of putting together an updated version. This started with me taking my old files and recreating everything in Affinity Publisher (a layout program similar to Adobe's InDesign). I hope to have that process completed by this Sunday, May 24th. From there, it's time to take notes and incorporate fixes. After I hit everything I've thought of, I'll be getting the revised edition out to some editors to check over. Then... ultimately, a new release!

So, what has me working on a new release now after 5 years? Well, back when I was originally putting together SF20, I told myself I would eventually complete the project by releasing a "Street Fighter: The Storytelling Game 20th Anniversary Companion", meant to contain all of the characters, locations, adventures, fiction, and other bits that never made it into the original SF20. Between SF20 and the Companion, I'd then have a full replacement for all of the original materials published for the game. Now, 5 years ago, the layout challenge was more than I was up to. Also, SF20 admittedly burnt me out a bit. Recently, however, the Street Fighter Facebook group has seen a massive uptick in activity. Additionally, the Brazilians continue to pump out material for the game, including their own take on a 20th Anniversary edition. This, combined with the strange isolation brought about by "The Plague-Times", has inspired me to step up to the plate again. The actual task of revising SF20 is not huge, but there is enough to fix that I'd love to do it. So, the idea is that the SF20 revision, besides being a needed revision, is also a good step to teach me the ins and outs of Affinity Publisher. This, then, will put me in a good skill position to tackle the Companion. The actual writing, art and character sheets have been ready for the Companion for about 3 years now! It's time to bring it home.

After entirely too much effort, I am proud to announce that the "Street Fighter: The Storytelling Game 20th Anniversary" Project has released! Check out the SF:20 Project! page for links to download the book itself, as well as all of the original source files so you can play with it yourself!

I can't say that I met my goal of having everything transcribed by the end of last week, but additional progress has been made. The most notable you can find here is solid work on the ending Conclusions Chapter. In addition, some material was added to Chapters 1, 2 and 7. Not visible here is a lot of other transcription work I've done that has yet to be incorporated into the existing chapters. Many of the Spot Rules from the various books have been typed up. As of now, all I believe that remains is to complete transcription of Chapter 4 of the Player's Guide, and Part 2: Chapter 2: Duelist from Contenders. Each of these chapters has been hacked at a bit, but still need to be completed. Feel free to check out the new content on the SF20 Project Page! September 1st release is still looking possible!

'Chapter 1: Introduction' has been added to and heavily revised. In addition to material introducing the book itself, material from Chapter 2 of the original book was added introducing the fictional world of Street Fighter. Also, I did another formatting and editing pass through all of the chapters and have exported updated PDFs so you can see their current state. After finishing Chapter 9 last week, I completed a review of material so I have a pretty good handle on what still needs to be done to get this project finished! I have about 1.5 chapters worth of material to type up, along with some miscellaneous bits and bobs. I'm aiming to get them all typed up by the end of the week, which should keep me on track for meeting my goal of "Project PDF publicly released on September 1st". I'm getting kinda excited...

'Chapter 9: Storytelling' has been added to the SF20 project page. I'm making progress here again! Now to take a sweep through all of the 'Street Fighter: The Storytelling Game' books and take notes on everything I still need to add to get this project wrapped up! My goal is to get this done by the end of August... which is a bold thing to say publicly, but it is what I'm pushing for. Wish me luck!

Some of the other pages have been added, but the only one with some real content so far is the SF:20 Project page. Check it out! It contains links to the current work in progress files for the Street Fighter: The Storytelling Game 20th Anniversary Edition. Some actual usable stuff here if you're a fan of the game!

Today I started the site! I've done some coloring and CSS styling, but all of the goodness is yet to come!